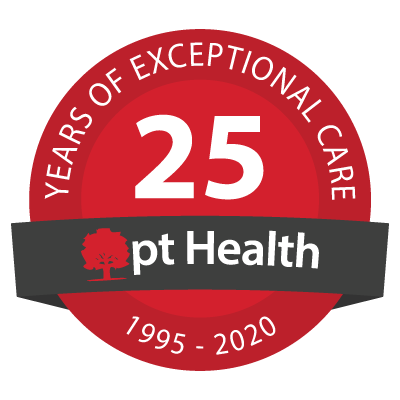 Our clinic is open and offering in-person treatment as well as virtual care. Please note that as a provider of community-based allied health care, masks are required to be worn at all times while inside our location.

View our virtual tour video to learn more about the enhanced measures in place so you know what to expect at your next clinic appointment.

Our Team Our Services

"Under the guidance of the folks over at pt Health, I’ve worked to regain mobility that I haven’t had in over 10 years. The results kept me going back without question. A+, would recommend to anyone that asks."

"Tore my calf and had a complicated recovery until I visited Caroline at pt Health. 2 weeks after seeing her for the first time I was able to finally play soccer with absolutely no pain. Highly recommended."

"I started going here after I was in a car accident back in January which left me with lower back & leg pain. Since attending for a few months I have never felt better. If you need a physiotherapist or anything along those lines I highly recommend you come to this place."

"The best place I could have chosen to carry out my MVA treatment. The physio/kinesiology team are all extremely knowledgeable and great with explanations, professional, kind, compassionate and encouraging. They got me in for an appointment right away. I am so happy that I found them!"